"A believable, poignant tale of friendship, loss, and acceptance."
A Taste of Blackberries blazed the way for the many other grief books that quickly followed, but few have approached the place of honor this one holds: Jim Trelease, Giant Treasury Of Great Read-Aloud Books 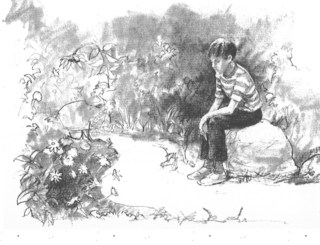 Mrs. Mullins' garden was usually off limits to children.

"The one great modern classic about death is, as everyone knows, E. B. White's Charlotte's Web. The author plunges us straight into the topic on the first page, no holds barred: "Where's Papa going with that ax?" In A Taste of Blackberries, we have a story for young children in which death - sudden and inexplicable - is the main theme, and it is a book in which the characters are not talking animals. It received wide critical acclaim in both the United States and in England when it first appeared. The chief purpose of the book is to write about death in a fashion that young readers can take, and in this Doris Buchanan Smith succeeds admirably. E. B. White is telling the child that he is allowed to mourn; that he is allowed to remember with a certain sadness. So is Doris Buchanan Smith. These two authors are saying things that are necessary, and which help children to cope and to grow."

The Marble in the Water: Essays on Contemporary Writers of Fiction for Children and Young Adults by British author, lecturer and reviewer, David Rees. 1980. The Horn Book, Inc.